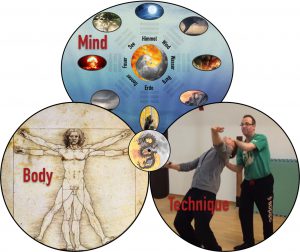 As the diagram shows, the Chinese Martial Arts (CMA) include the areas of mind, body and technique / applications. For each area there are special exercises, which are all connected and build on each other. Technique, respectively the effectiveness of the applications, depends on the physical skills and the development of these needs the right “ideas” in the mind. These ideas in turn are needed to understand the techniques and to perform them effectively.

Furthermore, the “mental work” trains many more things concerning the mindset and behaviour, which in turn leads to a competence in dealing with violence, which in turn leads to using the techniques more effectively at the risk of one’s life. The body is an important training instrument.
A complete authentic line has training material in all parts, which are coordinated with each other and which ultimately make up this tradition.

In order to be able to teach these contents in a structured way, there is a curriculum for students which has proven itself. Now one must know that each of these contents is structured like an onion. You always show only one peel, one layer. Usually, we start with the simple applications, plus the basic ideas and physical exercises. The further you get the deeper you go, you approach the point in the picture where everything interlocks. The core of the teaching. 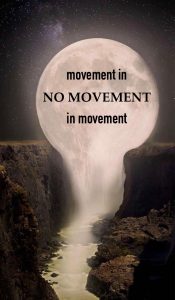 Such a teaching principle has the advantage that you can get people fit and strong quickly by showing them the simple techniques and physical exercises and giving them ideas. Ultimately, however, one moves only on the outer shell.

You can also show people only parts of it, e.g. only physical exercises or only techniques/applications, depending on what you want to achieve. Such a principle naturally leads to different people understanding different things under one and the same martial art.

Of course, the CMAs also had to find a concrete method to quickly get their practitioners to defend themselves and train them realistically. It is important to remember that in those days it was not possible to be injured for a long time. There was no health insurance and the medical possibilities were limited. A fracture could quickly lead to incapacity to work (which was tantamount to a social disaster) and an infected wound could quickly become fatal.

So the first step in the training was to show the most important part to the trainees: The blows, punches, cuts and throws with various weapons.
The concrete techniques were the foundation of the training. They were first practiced alone (in the form of drills) to grind in the movement, and then immediately on the partner to practice them over and over again.
If you only have a few weeks time for the basic training, then you have to concentrate on the essentials: That which kills, maims, incapacitates the other. 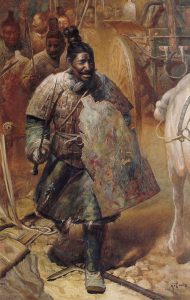 This type of training trains a certain mental attitude: “Kill, or be killed”. Soldiers can’t afford to have sympathy. For this reason, they were trained to always apply one of their learned applications to end the fight as quickly and efficiently as possible.
The nature of the applications led in parallel to a desensitization to the exercise of physical, lethal, violence, because the techniques naturally included knowledge of human anatomy. It was taught where to turn when cutting through certain vessels (so that the blood does not splash into the eyes), how to free the sword from protruding intestinal loops most effectively, how to prevent a pierced body from getting stuck on the spear shaft etc. For a person of the 21st century in Central Europe these things sound strange, but for a person of that time dead and mutilated people were everyday life.

However, practicing the applications alone is of course not enough to be able to stand up to a defending opponent, especially since “free”, uncooperative training with weapons is not without danger. For this reason there was the so-called “boxing”, the unarmed fight.
The movements of the armed applications can all be transferred to unarmed techniques, especially since many applications have strong wrestling parts. Also the theories of fighting about footwork, coordination etc. (as there are for example in spear applications) can be practiced very well in unarmed wrestling.
In the unarmed fight you practice to bring yourself into a position to perform the actual, final applications. As these applications (besides cuts and stabs) often consist of throws on the back of the head or involve throws that severely injure the limbs, the conclusion in free combat is often only hinted at.
This type of free practice is called “pushing hands” in the CMA. The “hint” can then be a “grab of the head”, or a “push” of the previously destabilized opponent etc. In this form of training, the aim is to manipulate the opponent in such a way that he can be controlled. This requires a high degree of coordination skills of the own body and a good understanding of movement in general, or how movement between two people takes place. 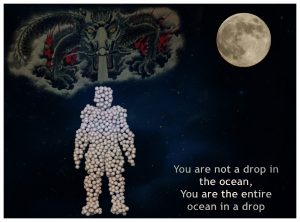 From this kind of practice theories about different “forces” and how they can be applied developed. In your own body and in relation to the other body. These theories can then of course be transferred back to the weapons and understood better with them, because there simply other levers and forces can work. The weapons improve the understanding of the body and the bodies improve the understanding of the weapons. Both increases the effectiveness of the applications.

As the word “theory” suggests, this type of training always involves the mind. It is, with its different levels (rational part, emotional part), the engine of the whole.
On a very simple level, I need my mind first to learn the applications. Memorize concrete techniques by copying them and internalize them so that I can recall them at any time. Memorizing by copying.

At the level of coordination skills, the whole thing is already becoming more complex. I have to create an “inner Image” of my body and learn to apply this picture according to defined rules (which I of course have to learn and understand first).
This “inner picture” is getting more and more developed, more and more complex, more and more detailed. Whenever I have expanded the image (see “multicoded neural networks“), it enables me to use my body more complex and to better implement (or understand) different theories of combat. This extension of the multicoded neural networks is what we mean when we talk about the “layers of the onion”.
This is what makes the “Art“.

The easiest way to compare bodywork is with the Franklin or Feldenkrais method of today. One learns to move one’s body more effectively and more complexly through images/ideas that the mind creates and understands.

What is the difference between CMA and Feldenkrais or Franklin?

In the CMA these ideas have developed against the background of a Confucian socio-cultural context and have also been strongly influenced by the predominant religions (Taoism and Buddhism).
Our mind is dependent on the context in which it develops. Ideas are born on the basis of the respective context. Art looks different in Europe than in Asia or Africa. Art today looks different than art in the 14th century or the stone age. 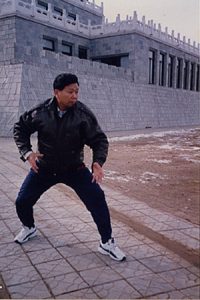 The CMAs have developed a special methodology to practice these ideas: “Standing” and various forms of moving exercises. The aim of these exercises is to better understand the “forces” and to better perceive and control them in one’s own body.
When practicing with a defending opponent it is difficult to listen into one’s own body or to implement certain ideas. Therefore you practice this first in standing position and then in moving exercises. Some directions of CMA leave out the standing and practice this directly in movement. The movements can be simple, or they can contain complex movements, which then (in the martial arts context) already contain the concrete applications (partly also developed from the drill exercises of the applications). These are then the so-called “forms” or “Kata”.

As we see, the core of a MARTIAL Art is the application. It is the ultimate goal to survive in combat. To achieve this goal, one must train body coordination and understand the theories of combat. These things are embedded in the different ideas that come from the mind/spirit and are strongly influenced by the socio-cultural context.

In the course of time, the different directions/styles of the CMA have developed different focuses, especially at the beginning of the 20th century: The use of blade weapons became obsolete and the “strengthening of the people” in combination with the renunciation of the “outdated old” was at the center of the change in martial arts.

Whereas before the applications were the actual goal, now the training of the body was the focus and “outdated old ideas” gave way to newer, “more modern” ones.

To find a teacher who has been shown all areas of a martial art and is able to show the “complete onion” himself is difficult, but the search is worth it.