There are many theories about the origins of Bagua Zhang, one of which has now become established in science. According to her, Bagua Zhang was founded by Dong Hai Chuang in the 19th century as a synthesis of several Chinese martial arts.

Dong was born in Hebei Province in 1813 and has learned various local martial arts since his youth, earning him a reputation as a skilled fighter.

At the age of around 40, he left his homeland to the south and in the following period became a member of the Taoist Chua Zhen sect, which practiced a meditation method of “walking in circles” to calm the mind and strengthen the mind. Dong combined this method of meditation with the training methods he learned in his youth, creating his own style. He first called this method “Zhuan Zhang” (rotating hands) and only later changed the name to Bagua Zhang (hand of the eight trigrams).

When Dong Hai Chuan started teaching his method of fighting in Beijing, he only accepted students with previous experience in other martial arts. The training consisted of only a few hand changes, which were carried out while walking in a circle, and of his theories and applications of practical struggle.

At that time it was normal in China to study and practice methods and ideas of other fighters in order to combine them with one’s own knowledge. This was even considered essential for understanding martial arts.

It is therefore not surprising that there are many different methods of Bagua Zhang, since each student of Dong created his own Bagua. Three of these early students were responsible for the spread of Bagua Zhang.

Yin Fu was a master of Luo Han Quan before he started studying with Dong Hai Chuan. He studied with him longer than any other student and had a nationwide reputation as a respected fighter, not least because he was the bodyguard of the Empress Mother. Another of Dong’s students was Cheng Ting Hua, a master of Chinese wrestling (Shuai Jiao), who himself taught many students, including Zhang Zhao Dong. Finally, the third known student is Dong Liang Zhen Pu, who was also his youngest student and was heavily influenced by the older students. 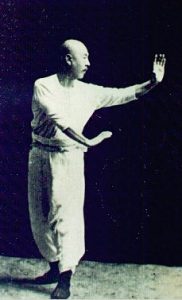 Even though Dong Hai Chuan did not start his martial art until the mid/late 19th century, it quickly spread throughout China during his lifetime.

Bagua Zhang has its roots in the northern Chinese methods of fighting. Like the other Chinese systems, it includes the strategy of changing and emphasizes especially the round movements and the evasive footwork. This is mainly done by using body twists and turns. The combination of footwork, logical body mechanics and images/ideas/visualizations makes it possible to quickly switch between different movements, directions and body alignments.

In Münster we practice Bagua Zhang after Zhang Zhao Dong, as taught to us by our teacher Paul Rogers.